Feel the creative vibes stir on the trail of Shakespeare, Dickens, Eliot and many more writers who have found inspiration in Warwickshire. Secrets hidden in well-known places, delightful villages, beautiful scenes off the beaten track... find your inspiration too

All Stratford's a stage: around town with Shakespeare

William Shakespeare wrote, “All the world’s a stage”, and as the world’s most-performed playwright he stirs us to this day with his gripping plots of love and loss, power and pride, families and friendship. But how did he write so much, so brilliantly? A visit to his creative roots in Stratford-upon-Avon provides some clues.

Join a Shakespeare walking tour around this gorgeous historic town, or “play fast and loose” (to coin another of the Bard’s memorable phrases) exploring at your own pace: Shakespeare’s Birthplace where he was born in 1564 and where his father ran a glover’s workshop; Shakespeare’s Schoolroom & Guildhall where you might join a Tudor lesson; the evocative Knot Garden and artworks of New Place where William’s family home in his prosperous later life is excitingly re-imagined.

Also discover Hall’s Croft, home to Shakespeare’s daughter and her physician husband, and further a-field William’s mother’s home at Mary Arden’s Farm in Wilmcote, plus picturesque Anne Hathaway’s Cottage in Shottery where he wooed his bride-to-be.

Back in Stratford, immerse yourself in some Shakespeare in the park at the Royal Shakespeare Company’s temporary, outdoor performance space, the Lydia & Manfred Gorvy Garden Theatre. Or enjoy the riverside peace of medieval Holy Trinity Church where Shakespeare was buried in 1616; his memorial bust is said to be a very good likeness.

Shakespeare’s links with Stratford-upon-Avon are well known but – “the game’s afoot” – you can also follow in his steps to many rural haunts that paint the backdrop to his life. Not for nothing are his works full of rustic images of flowers, trees and animals!

Wander through pretty Aston Cantlow, to the north of Stratford on the Arden Way walk, to see the church where the Bard’s parents were married in 1557; then tuck into a meal and a drink in The King’s Head where they reputedly held their wedding breakfast. William married Anne Hathaway at nearby Temple Grafton (although not in the present church).

Downriver from Stratford at Welford-on-Avon Will supped with fellow playwright-poets Michael Drayton and Ben Jonson in the flagstoned Bell Inn, still a cosy choice today. More riotously – he did after all give us the word “madcap” – wayward Will imbibed so much at a drinking competition at Bidford-on-Avon that he reputedly fell asleep under a crab-apple tree on his way home. You might prefer to relax with a picnic on Bidford’s wide, grassy riverbanks.

Surprising to say, it wasn’t Shakespeare that drew visitors to Stratford-upon-Avon in the early 1900s so much as the best-selling Victorian and Edwardian novelist Marie Corelli who lived here at the time.

Corelli, the author of romantic and mystical novels, cultivated an enigmatic persona combined with a colourful line in self-publicity. Onlookers were certainly agog to see her drifting down the River Avon in a Venetian gondola she had bought, propelled (as she recorded) by a “swart and muscle bound gondolier”. She used her trips to plan ideas for her next novels – whether that’s your intention or to simply sightsee, you can recreate the experience today gliding along the river in a gondola too.

A Victorian author of a somewhat different stripe is also linked to Stratford, and to the village of Barford to the north, as she went to school in both places. Elizabeth Stevenson – Mrs Gaskell – shared a delight in Warwickshire’s scenery with George Eliot and perhaps you will recognise the meadows and “old low grey church” of St Peter’s at Barford, which she recalled in her novella Lois the Witch.

Through her writing Mrs Gaskell became friends with Charles Dickens, who visited Warwickshire on numerous occasions gathering characters and locations for his novels. Continuing north from Barford, at Royal Leamington Spa you can open scenes onto Dickens’ Dombey & Son, for it was to this elegant spa town that the author sent Paul Dombey to recuperate following the death of his son.

Dickens also came to Leamington on a reading tour in 1858 when he stayed at The Regent Hotel on The Parade, and there’s plenty to tempt you to linger in town too: from the spa heritage of the Royal Pump Rooms to wide boulevards, gardens and parks perfect for strolling. Then like Dickens, Dombey and his companions you might head for Warwick Castle and “the haunted ruins of Kenilworth”.

At awesome medieval Warwick Castle you can find out all about Richard Neville, Earl of Warwick, and his notorious side-swapping role in the Wars of the Roses: a character memorably dramatised by Shakespeare as “Thou setter-up and plucker-down of kings” (Henry VI, Part III).

At the time of Shakespeare, Warwick Castle was granted to Sir Fulke Greville who spent a fortune refurbishing it, but still found the energy to pen his 664-stanza A Treatise of Monarchy. A dramatist, prolific writer of sonnets and philosophical poems, and biographer (and friend) of Elizabethan court favourite Sir Philip Sidney, Greville would meet an ugly end – he was stabbed by a jealous servant in 1628, giving rise to stories of his ghost haunting the castle’s Watergate Tower. You can view Greville’s surprisingly plain tomb in the Chapter House of Warwick’s Collegiate Church of St Mary.

Much later, Warwick’s Catholic Church of St Mary Immaculate was the location in 1916 for Lord of the Rings author JRR Tolkien’s wedding with Edith Bratt. Tolkien had been raised in and around Birmingham, parts of which then lay in Warwickshire, and in a letter to his publishers he would write that The Shire – home to the Hobbits – was “more or less a Warwickshire village” of the late 19th century. It has been further mooted that Warwick and its castle were architectural inspirations for Edoras and Minas Tirith in The Lord of the Rings.

Charles Dickens thought neighbouring Kenilworth “beautiful beyond expression” and an ideal spot for a lazy summer holiday, while Sir Walter Scott recalled the heydays of the castle to write his historical romance Kenilworth, published 200 years ago in 1821.

Exploring the mysterious circumstances of the death of Amy Robsart, wife of Queen Elizabeth I’s favourite Robert Dudley, Earl of Leicester, Scott ‘s tale weaves in accounts of the queen’s 1575 royal progress to Kenilworth and the magnificent revels that Dudley laid on for her during her 19-day stay. Dudley even built a magnificent garden to impress Elizabeth, recreated in modern times so you can follow in the steps of fascinating fact as well as romantic fiction.

Someone else who enjoyed a visit to Kenilworth Castle was Jane Austen and her family, her mother recording that it “afforded us much entertainment”. Jane, her sister and mother were staying at nearby Stoneleigh Abbey – for 400 years the country seat of relatives – in the summer of 1806, and the abbey and its family intrigues soon worked their way into Jane’s fiction.

Join a guided tour of the Jacobean-cum-Baroque abbey and stroll the beautiful grounds to see how Jane re-imagined details of the house, woodland walks and the chapel in descriptions of Sotherton Court in Mansfield Park. Compare rooms, “all lofty and many large, and amply furnished in the taste of fifty years back, with shining floors, solid mahogany, rich damask, marble gilding and carving.”

Round off your visit to Stoneleigh with an Elizabeth Bennett tea (what else?) including sandwiches, scone and cake.

Rugby, apart from the sport to which it gave its name, has been a hotbed for literary greats, not least of course Thomas Hughes who based Tom Brown’s Schooldays (1857) – “the first schoolboy novel” – on his own boyhood at Rugby School.

Talking of schooldays, poet Philip Larkin was born and raised in nearby Coventry – lines from his poem, ‘I remember, I remember’ about a train stop that jogs his memory of his boyhood are written on a plaque at Coventry Railway Station.

Look up Larkin’s haunts on a self-guided tour, including: the old cathedral where he was baptised, King Henry VIII School where he first had his writing published in the school magazine, and the 17th Century Golden Cross Inn where he sat reading books and drinking with friends.

George Eliot Country: Middlemarch to Mill on the Floss

It’s believed that George Eliot’s “Study of Provincial Life” Middlemarch is partly based on her experiences of Victorian Coventry, where she lived as a young woman in the 1840s before moving to London. But it’s North Warwickshire and Nuneaton that take us to the heart of George Eliot Country: landscapes the author remembered from her childhood and distilled into fictional settings, though her unconventional lifestyle and views meant she could never return home.

Now, however, there’s a gallery dedicated to Eliot in Nuneaton Museum & Art Gallery, and local landmarks that inspired her are celebrated, for example in The Unofficial George Eliot Countryside walking map.

Eliot was born Mary Ann Evans on the Arbury Estate in 1819, where her father worked as a land agent, and Arbury Hall (normally open on bank holiday weekends, April to August) provided inspiration for the “castellated house of grey-tinted stone” Cheverel Manor in Mr Gilfil’s Love Story. Eliot’s childhood home, Griff House (now a Beefeater / Premier Inn), prompted descriptions of the Tullivers’ “trimly-kept, comfortable dwelling house” in The Mill on the Floss.

Meanwhile at Astley you can see the church where Eliot’s parents were married and which the author transformed into Knebley Church where the eccentric Mr Gilfil preaches. Nearby Astley Book Farm & Coffee Shop has a good selection of Eliot’s books, plus some 75,000 second-hand and antiquarian tomes – well worth a browse and there’s delicious cake too.

Today as ever, Eliot’s descriptions of “tree-studded hedgerows” and countryside captivate and refresh jaded spirits. Take time to pause along the Griff Arm of the Coventry Canal, recalled in Eliot’s Brother and Sister Sonnets: “The wide-arched bridge, the scented elder-flowers / The wondrous watery rings…”

Who would ever have guessed that the village of Polesworth, on a turn of the River Anker in north Warwickshire, was a focal point in the 16th century for some of the greatest poets of the age? In 1574 Sir Henry Goodere who owned the manor began The Polesworth Circle, the largest literary gathering outside of London at the time, and along came the likes of Michael Drayton, Ben Jonson and even William Shakespeare.

Drayton, who had been born at nearby Hartshill, wrote of “Clear Ancor, on whose silver-sanded shore / My soul-shrin’d saint, my fair Idea lies”, and declared his love through sonnets for Sir Henry’s daughter, sadly unrequited. John Donne also wrote his poem ‘Good Friday, 1613. Riding Westward’ at Polesworth.

Building on this rich heritage, there’s now a Poetry Trail you can follow around Polesworth from the abbey, through the village and along the waterside. Specially written poems displayed on installations from benches to sculptures explore historic events and people, local mining, landscapes and regeneration. There’s Jane Holland’s modern take on ‘The River Anker’, “full-lipped, spilling / generous from its broad lap”, and Raymond Hendy’s ‘Memories of Pooley Mine’, “burrowed deep into my soul”.

Whatever literary corner you explore in Warwickshire, perhaps the final lines of Helen Yendall’s poem about Polesworth’s ‘Famous Men’ of letters will strike a creative chord: “So, as you walk on, keep these men in mind / And ask yourself – what will you leave behind?”

See our top 20 places to stay or eat with a story to tell. 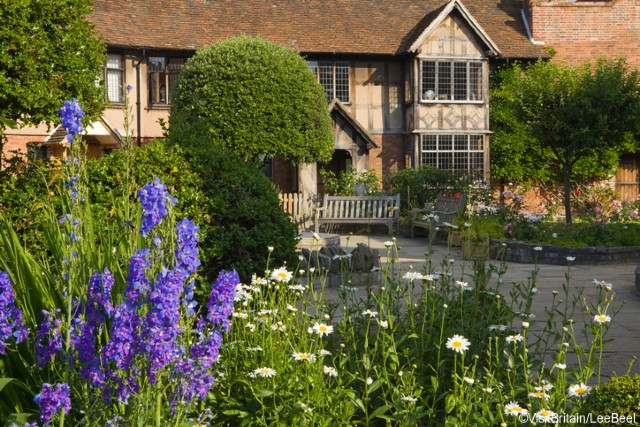 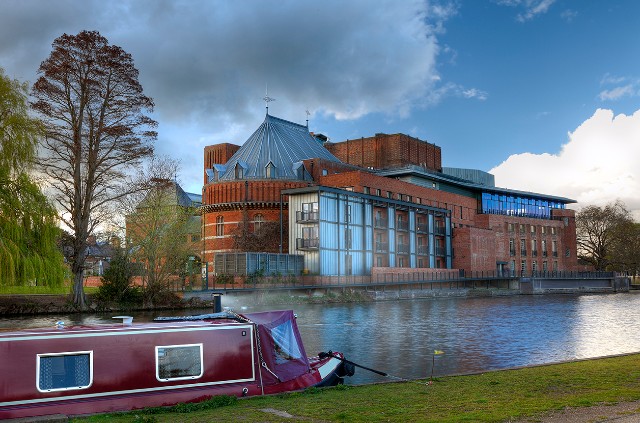 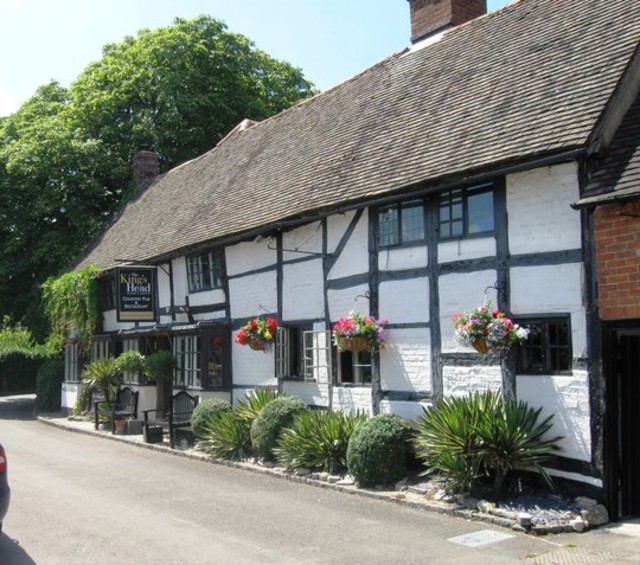 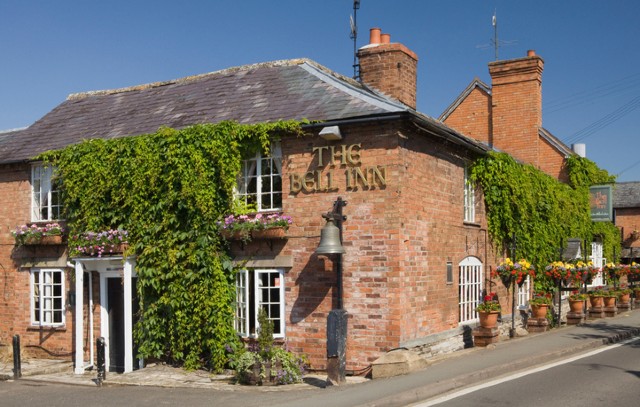 The Bell Inn, Welford on Avon 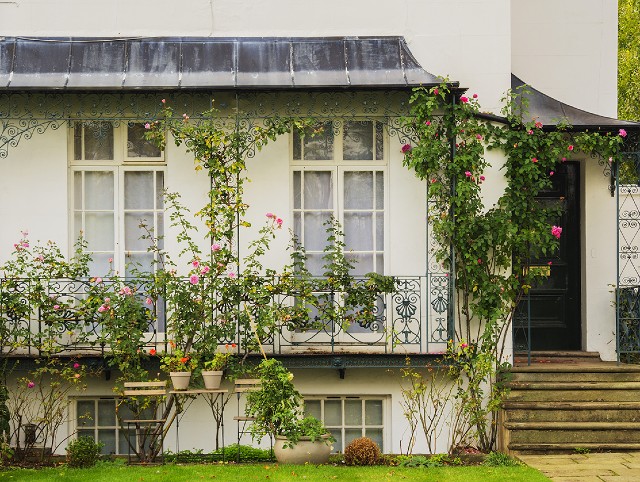 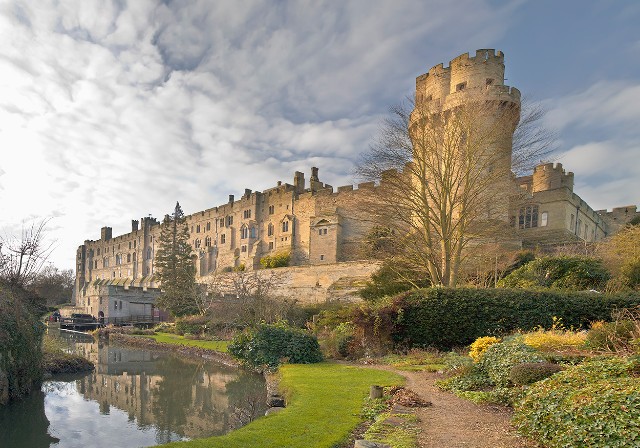 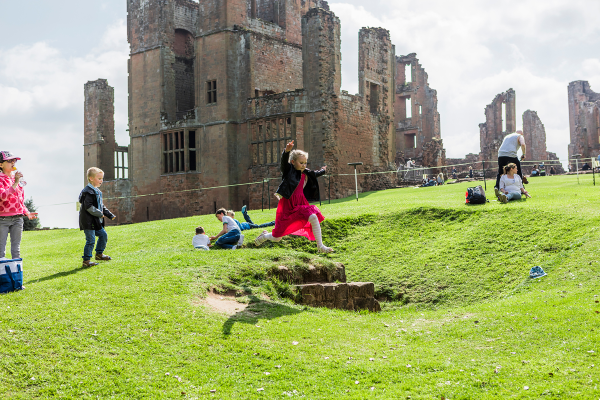 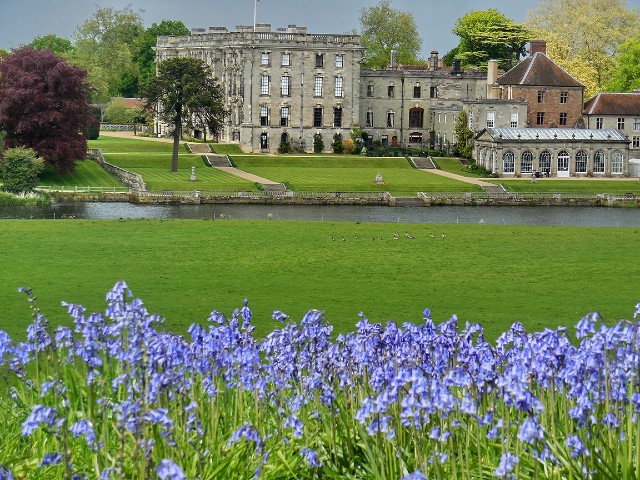 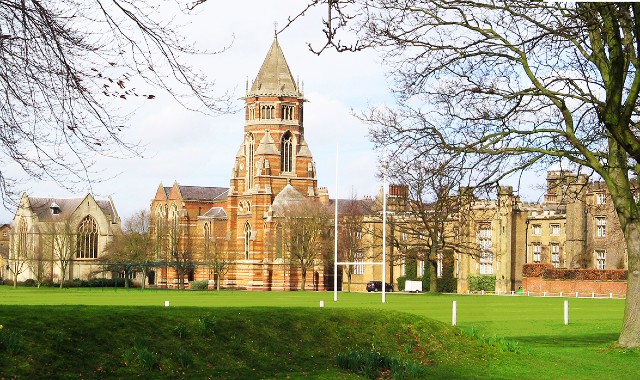 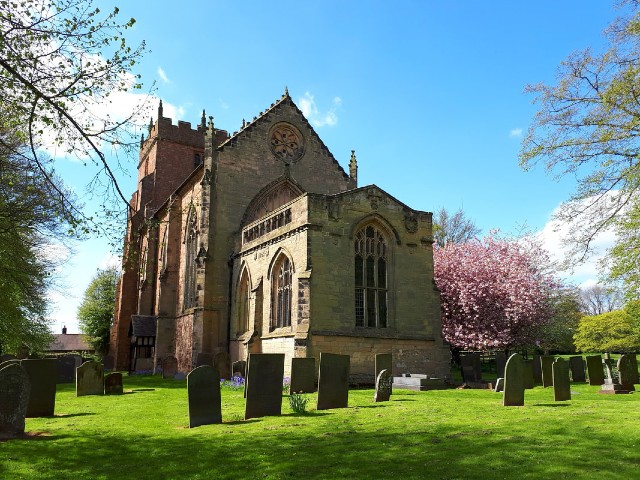 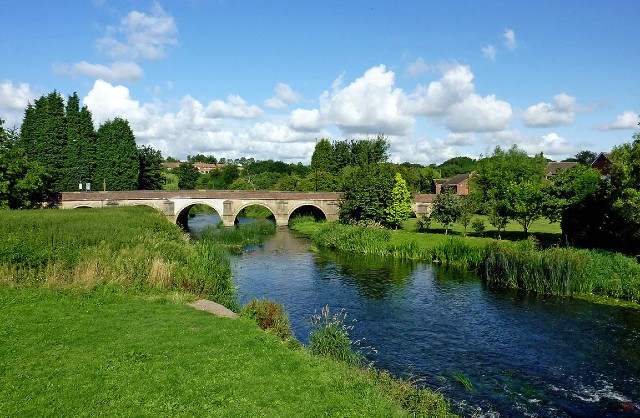