As the country celebrates Her Majesty’s Platinum Jubilee, we highlight why royalty has been drawn to Warwickshire over the centuries – and where you can follow in their footsteps.

Coventry Telegraph - Timeline of The Queen's visits to Coventry and Warwickshire

Discover 1,000 years of royal history in Warwick, where Saxon Queen Ethelfleda founded a ‘burh’ (fortified settlement) in AD 914 and William the Conqueror built an 11th-century castle. King Henry VIII, who owned the later medieval castle, held court here, endowed the town and provided for “a skolemaister” (modern royals have also visited Warwick School). Meanwhile Queen Elizabeth I threw the town’s dignitaries into a flap in 1672 when muddy roads made her alter her itinerary. The weather was kinder in 1986 when Princess Diana opened the recreated Victorian Rose Garden in the castle.

Highlights of a visit to Warwick Castle today include The Kingmaker walk-through attraction bringing to life the drama of “Thou setter up and plucker down of Kings” Richard Neville during the Wars of the Roses. Or immerse yourself in The Royal Weekend Party recreating the social whirl of Francis and Daisy Greville, 5th Earl and Countess of Warwick – Daisy was the mistress of the Prince of Wales (later King Edward VII) in the 1890s and the royal guest visited on some 40 occasions. 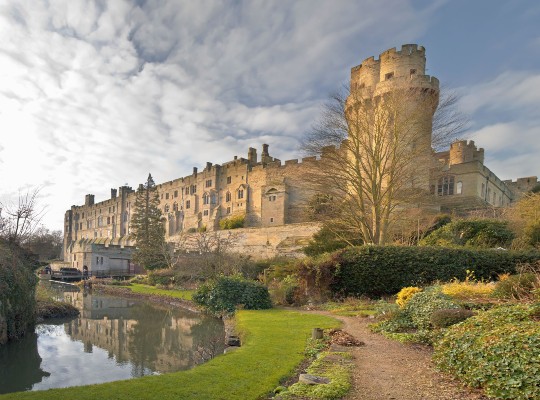 King Henry VIII’s break with the Church of Rome so that he could divorce Catherine of Aragon and marry Anne Boleyn ushered in dangerous times for Catholic families like the Throckmortons of Coughton Court, and Sir George Throckmorton famously clashed with King Hal. At the family home today you can see prized Catholic relics once hidden away, including an ornately embroidered purple velvet cope (priest’s cloak) reputedly worked by Queen Catherine and her ladies-in-waiting, and a fine linen chemise (undergarment) that it’s claimed Mary, Queen of Scots wore when she was beheaded by order of Elizabeth I in 1587. 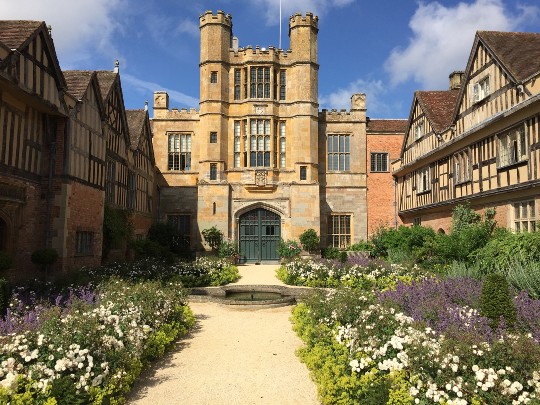 The reopening this spring of St Mary’s Guildhall following a £5.6m makeover gives you the chance to view the rare Coventry Tapestry in a fresh new light. The Tudor treasure, specifically woven for this wonderful medieval guildhall, features King Henry VI and his Queen, Margaret of Anjou – Coventry was once dubbed her “secret arbour”. Ill-fated Mary, Queen of Scots, imprisoned in the guildhall in 1569, was probably a lesser fan of the then town. 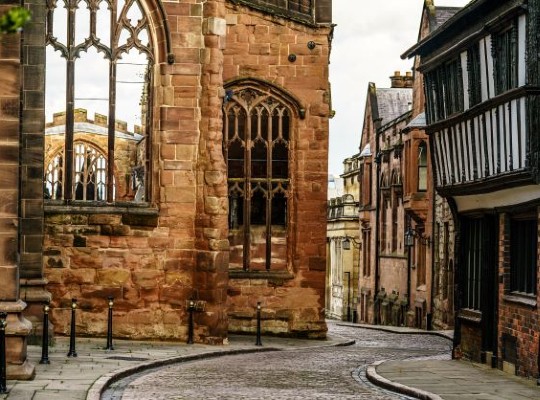 There’s more on the saga of Mary, Queen of Scots in archives at the Herbert, which holds a letter from Elizabeth I to the mayor explaining her order to bring “the Scottyshe Queene to that our towne of Coventrie and there to see hir safely kept and garded”. Also at the Herbert, don’t miss the Discover Godiva Gallery that unpicks the notorious story of why Leofric, Earl of Mercia’s wife Lady Godiva rode naked through Coventry in 1040. Queen Elizabeth I, visiting Coventry in 1566, was entertained with a pageant about Godiva and was presented with a silver-gilt cup filled with £100 in gold. 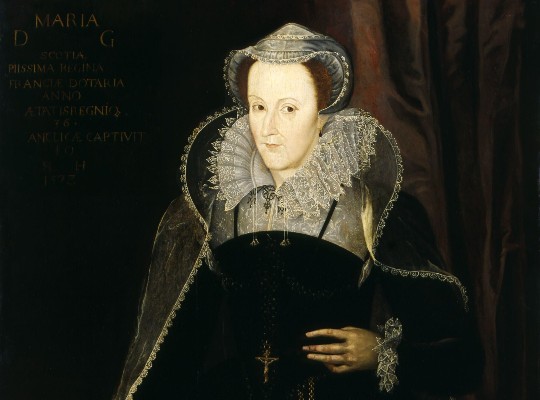 Travels with Queen Elizabeth I

Queen Elizabeth I’s legendary summer ‘progresses’ (royal tours) came through Warwickshire on numerous occasions. In 1572 she spent two nights at Lucy family home Charlecote Park and slept in the Great Bedchamber that later became the Drawing Room – you can still see the coat-of-arms over Charlecote’s front porch that proudly commemorates the visit. The Lucys had a less auspicious brush with royalty later when Catherine, widow of Thomas Lucy (d. 1684), departed with most of the family jewels and secretly married Charles II’s illegitimate son, George Fitzroy, Duke of Northumberland. Discover more tales on a visit and enjoy fabulous strolls in the park. 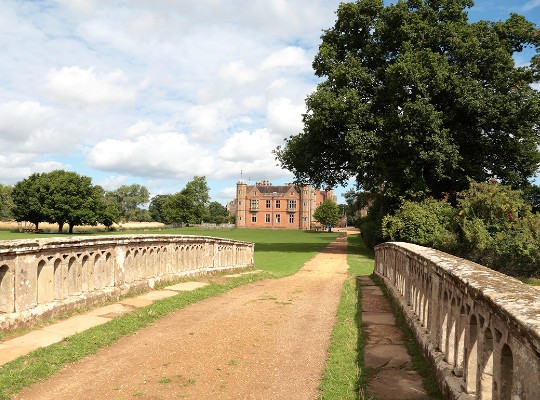 Also follow in Elizabeth I’s footsteps to Kenilworth Castle, which the Queen gave to her favourite Robert Dudley, Earl of Leicester. Desperate to win her hand in marriage, Dudley laid on 19 days of “Princely Pleasures” for her in 1575 but despite firework displays, music, dancing, theatre, bearbaiting, hunting, speeches and feasting the Virgin Queen withstood poor Dudley’s romantic advances. Learn more in the exhibition in Leicester’s Gatehouse, gaze from the tower Dudley built for Elizabeth’s use, and wander the authentically recreated garden where he beguiled her with arbours, a bejewelled aviary and magnificent fountain.

Kenilworth has many further intriguing royal stories, from King John to King Charles I who stayed here in 1644 – the castle changed hands twice during the English Civil War. 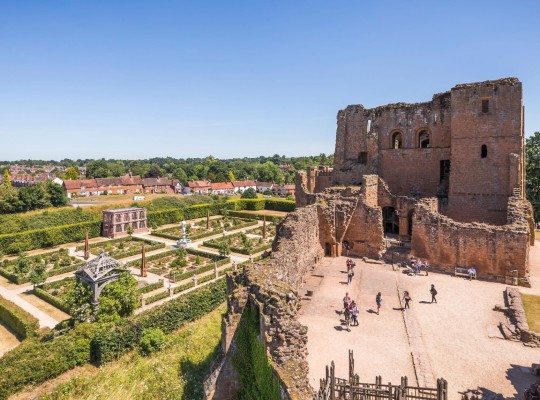 Civil Wars with Charles I and Charles II

Imagine the surprise when an 18th-century visitor to Stoneleigh Abbey spotted an eye in a painting of a vase of flowers and, after paint removal, a portrait of Charles I was revealed. During the Civil War the Abbey’s owner Sir Thomas Leigh had supported Charles, giving him shelter in 1642 when Coventry had refused him entry. But why was the King’s portrait later painted over? Join a guided tour to find out, and hear anecdotes about other royal guests: when Queen Victoria stayed her ‘technophile’ husband Albert was fascinated by the newfangled flushing lavatory – which you can see, as well as the Queen’s recreated bedroom. 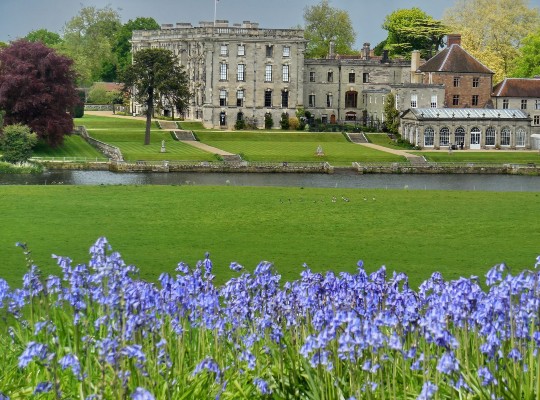 Artefacts, interactive displays and films in this exhibition investigate what happened at Edgehill in 1642, the first pitched battle of the Civil War. Who were the heroes or villains? Walk the trail across the battlefield where Royalists under Charles I and Prince Rupert were brutally pitted against Parliamentarians under the Earl of Essex – both sides would claim victory – and climb up the escarpment for panoramic views over the site. 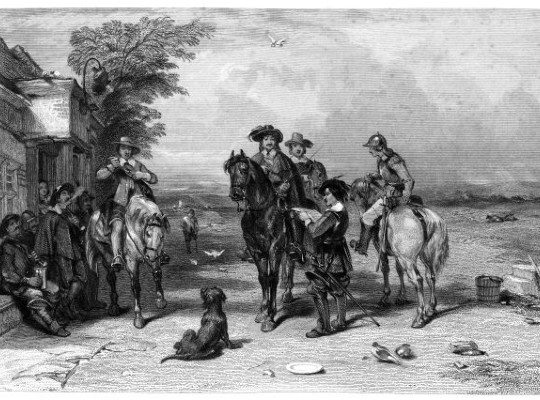 Following his decisive defeat at the Battle of Naseby 1645, King Charles I was helped to flee pursuers by Sir Thomas Cave who lived in the old manor house at Stanford on Avon and encouraged villagers to “repel the parliamentarian visitation with pike, musket, pitchforks and staves.” The Charles I bridge in the park recalls the dramatic episode. Built in 1697 today’s Stanford Hall, on the Warwickshire border, boasts a superb collection of royal Stuart portraits, many once belonging to Henry Stuart, brother of Bonnie Prince Charlie. (Public visiting: selected event and open days). 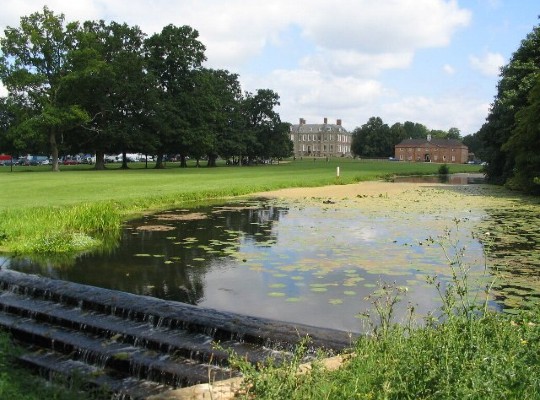 Based on the escape route taken by Charles Stuart, the future Charles II, after his defeat in the final battle of the Civil Wars at Worcester in 1651, this 625-mile waymarked walk includes 35 miles through Warwickshire: stretch your legs along sections from Alcester to Wootton Wawen, Snitterfield, Stratford-upon-Avon and Long Marston. Hotly pursued by Cromwell’s men, Charles travelled disguised as ‘William Jackson’, servant to Jane Lane, the sister of a Royalist officer. Today you can take your time, with pubs for refreshments, peaceful countryside and canal scenes, and breathtaking views from the Welcombe Hills as you come into Stratford. 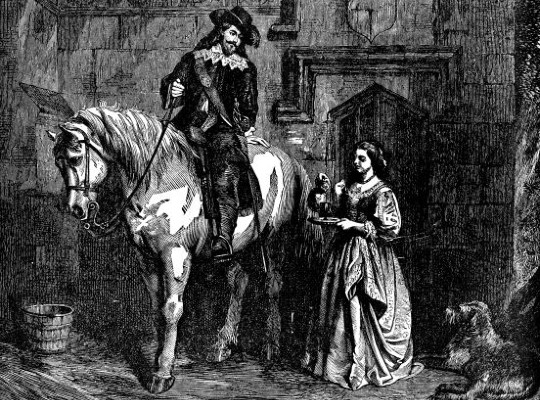 The Seymours of Ragley Hall can claim Jane Seymour, third wife of Henry VIII, as a relation in their family tree, while more recent ancestors, the 2nd and 3rd Marquesses of Hertford, were close pals of the racy Prince Regent (later King George IV). A bed was even specially built for the Prince when he first visited Ragley in 1796 and he set tongues wagging over his devotion to the beautiful but elderly wife of the 2nd Marquess. The Palladian mansion’s TV and film credits include its Great Hall as the backdrop to the first meeting between Prince Charles and Diana in Netflix’s The Crown. (Hall has limited opening, see website.) 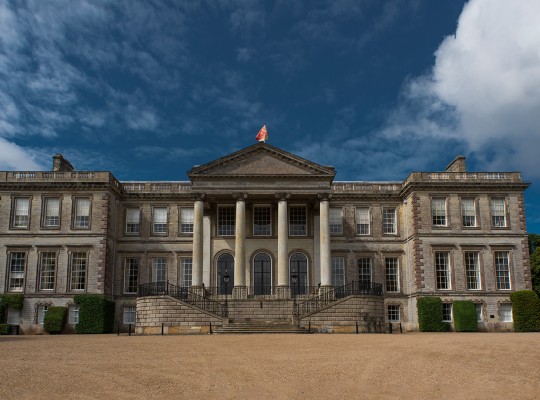 So why is Leamington Spa ‘Royal’? It’s thanks to Queen Victoria: as an 11-year-old princess she visited in 1830 and stayed in the Regent Hotel (so-named by permission of the Prince Regent) and was later successfully lobbied to grant the town its regal prefix in 1838. Admire the suitably majestic statue to the Queen outside the Town Hall, browse the town’s noted Georgian, Regency and Victorian architecture, and take a stroll in Victoria Park, opened to mark the Queen’s Diamond Jubilee in 1899. 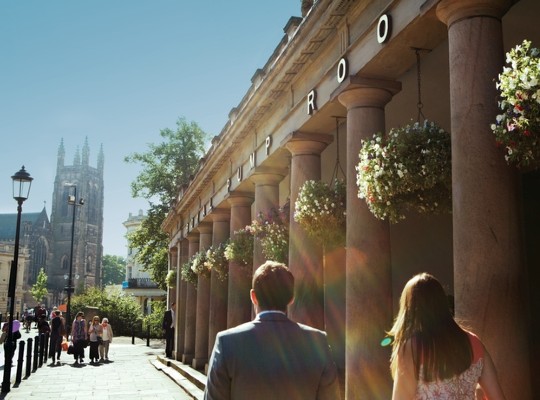 Where did the warrior Queen Boudica fight her last battle against the Romans before vanishing from history? Displays in the Heritage Centre housed in St Peter’s Church look at the evidence to support the belief that events took place between Mancetter and Hartshill, while archaeological finds throw a light on the strategic importance of Mancetter as a Roman site. 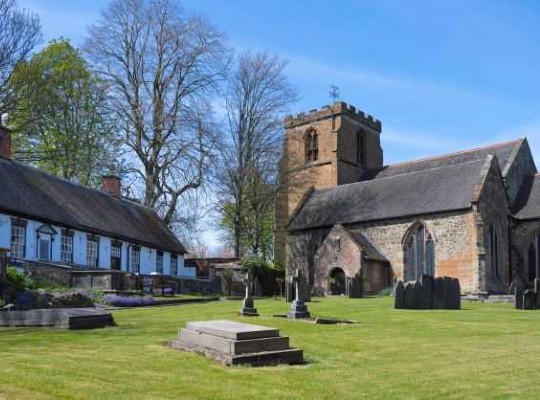 Let your imagination run riot among these evocative Neolithic/Bronze Age stones on the Warwickshire/Oxfordshire border. The King’s Men stone circle, the Whispering Knights burial chamber, and the hunchbacked King Stone guarding a Bronze Age cemetery have intrigued people for centuries. Could the legend be true that what you see here is a monarch and his army turned to stone by a witch after the old hag tricked the king in a wager to become ruler of all England? 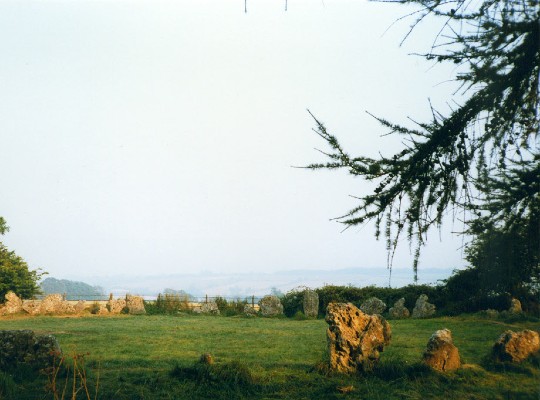 With so many historic haunts of kings and queens to explore, why not treat yourself to a short break?